This post is written by Noor, a Muslim High School student that participated in Dressember. 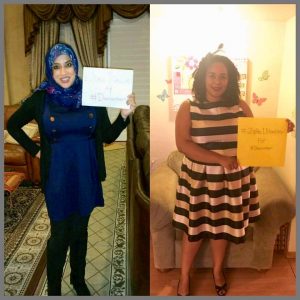 RhiAna and Hana found out about the #2Faiths1Friendship for Dressember initiative through social media and decided to join. For more about the amazing way in which they met and how they built a friendship, go here: http://on.fb.me/1PVXSjx

What would it look like if Muslims and Christians combined their efforts to end human trafficking? Our joint struggle can truly mean something to the men and women who are unable to fight, which is all the more reason for us to all take a stand, together.

Human Trafficking: (n.) the illegal movement of people, typically for the purposes of forced labor or commercial sexual exploitation.

According to the National Human Trafficking Resource Center (NHTRC), California alone has had a total of 711 reported cases of human trafficking or modern slavery, and 3,827 cases in the past nine years. Let alone the global numbers.

I had learned about these things, but how could I actively lend a hand to end this? Enter Dressember.

Throughout the month of December, my friends and I wore dresses every day as a statement against human trafficking.

Although my first response to those who asked me what I was doing was the standard answer, I began to realize there was a deeper meaning. Allow me to explain:

In summary, Dressember opened a number of doors for me to become locally active in ways I had never even thought of before. Through this month, I was motivated to learn and do so much, and I felt empowered by all the women I knew to be walking those days like I did: in a fabulous dress!