On one side of the door are the hosts, who, despite having been fasting from food and drink for the past 16 hours, have prepared a delicious iftar dinner for company. They are excited to share this Ramadan meal but are also nervous about hosting strangers at their home. Will my guests feel comfortable? Is there enough food?

On the other side of the door are the guests, Christians who accepted the dinner invitation, carrying gifts for the hosts. They are also a bit nervous: Will I say something wrong accidentally? Will I like the food?

Then, the door opens, each group takes a step toward the other, hands are unfolded in greeting and names are exchanged through smiling mouths. After the introductions, the importance of Ramadan to Muslims is explained. At sunset, the hosts pass around dates and water to break the fast and everybody sits down for dinner and dessert. What first began as awkward and polite conversation-making progresses into relaxed and easy banter, with ripples of laughter here and there to break up the chatting that continues well after 10:00pm:

This scene played out in several different forms in the past two weeks as 12 Muslims hosted over 70 (combined) Christian guests for a home-cooked Ramadan iftar dinner. These hosted dinners are part of a larger 2 Faiths 1 Friendship initiative to promote friendship and understanding between Muslims and Christians.

The hosts and guests communicated briefly over email before the day of the dinner, but the majority of them had never met before! Check out the pictures and responses: 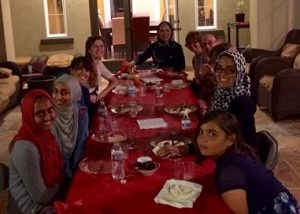 One of the Muslim host couples admitted that this was their first time hosting Christians at their home, and they got to see the similarities between religious Christians and Muslims first hand. Jessie, a Christian guest, reflected, “I have often experienced that food brings people together… When we share a meal with another, we share a lot more than just food–it’s an opportunity to share our hearts.“

Noma, one of the Muslim hosts, echoed Jessie’s sentiments: “Spending time in another person’s home is as personal of an interaction as you can get… Personal interactions go a much longer way in changing the perceptions we have of each other than big events.“ 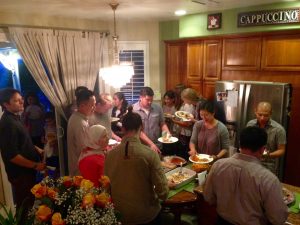 “It is so valuable to meet people who are ‘different’ from us in their natural environments… I think when we meet people and see the commonality of our existences and our environments, it takes a lot of the fear and apprehension out of reaching out to them,” wrote Gregg, a Christian guest.

Shahnaz, another Muslim host: “What touched me the most: watching our kids play; I couldn’t help thinking that this is where understanding or misunderstanding, really anything, all starts… If all kids learn socially at a young age, that someone can look different from them, but still be cool, fun to play with I think that our next generation of adults will realize they have more in common that not, and be that much more loving and understanding,” she said. 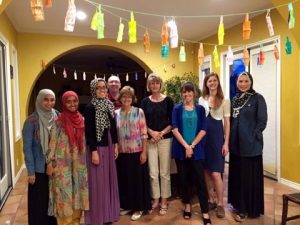 Another touching sentiment came from one of the Christian guests, who suggested that, next time, Christians prepare the iftar meal for Muslims. “It must be really hard not eating or drinking anything all day and then preparing a meal for a bunch of people… it might be nice for us to provide the meal for them as an act of friendship during their fast,” she said.

Truly, it is when Muslims and Christians can reach a point when they serve one another and fortify one another during times of difficulty that a strong friendship emerges. We thank God for His facilitation of the Muslim-Christian dinner initiative, and we look forward to replicating the idea at Christmas, when Muslims can join Christians at their homes to learn more about their holiday beliefs and traditions!